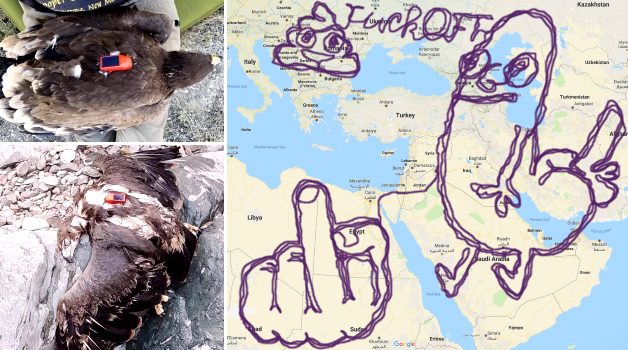 Not all eagles migrate but those that do have complex migratory patterns. Eagles ride columns of rising air called thermals and can average speeds of 50 kilometers per hour (30 mph). Being one of the highest-flying bird species on record, it can effortlessly circle in a strong thermal to a high altitude, and then glide long distances in the direction of its migration until it finds the next column of rising air. Generally, eagles follow seasonal food supplies. As lakes and streams freeze over, eagles head south to find open fresh water or stay near the coast.

PETA volunteers tracked the migration of an adult eagle named Cockatoo for 10 years until it passed away last week in the Sahara Desert. They managed to recover the data from its GPS device and now are analyzing his path. Scientist believe that this specific bird followed a special route trying to communicate a deep message drawing unequivocal signs on the map. They assume this can’t be a coincidence and are now trying to figure out the meaning behind these marks.

Cockatoo was caught in Afghanistan where he spent the first month following a path that is believed to assemble a male genitalia. After that he migrated South crossing the Persian Gulf which is unusual for inland species because of the lack of rising hot air above the water. He spent the summer up North reaching Kazakhstan spending most of the time nesting in Azerbaijan. Then he followed the path down to his initial location and repeated the same circle three consecutive years in a row when he took a left turn and went to the Balkan peninsula. He spent two years there, mostly in Romania when he turned back to the Middle East, flying down to Africa through the Suez Canal. He spent his last years in North Africa, reaching the most southern points ever recorded by an Eagle and never leaving the Dark Continent for years. Analizing the contents of his stomach, scientists have noticed that Cockatoo has completely changed his diet, eating only sand.

Some sources have reported that Cockatoo’s path resembles a fictional character called Dick Butt and a Pile of Poo, however, this is yet to be confirmed by officials…

18% of the World’s population have never seen the Moon