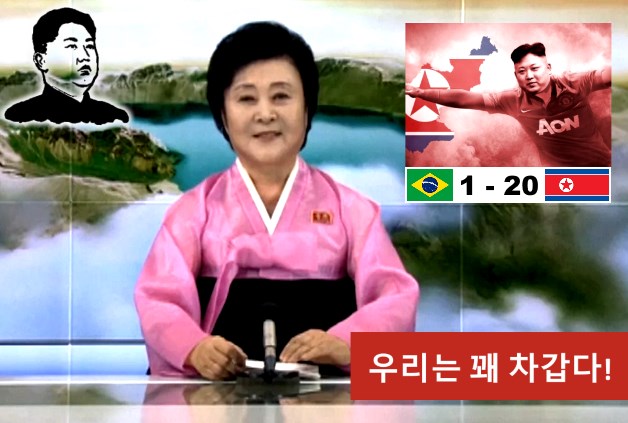 The North Korean central national television has just announced that the supreme leader and his team won the FIFA World Cup in Moscow, Russia.

Announcement by the North Korean media:

Our national team never has to play in the groups like other nations, because of our undoubted superiority. We challenge the winner of other nations in one final match: this time against Brazil.
…
Our supreme leader entered the field and scored 10 goals in 10 minutes without his teammates having to touch the ball. When the score was 0 – 10, Kim Jong-un left the game in the biggest applause the Luzhniki Stadium has ever seen.

Short after he went to the locker room, the Brazilian team scored a goal and Kim Jong-un had to return to score 10 more. The opponent seeing that they can’t take a chance gave up after 25 minutes to avoid an even bigger humiliation.

The North Korean goalkeeper who is blamed for the Brazilian goal is facing a serious punishment. He and his whole family (three generations) was sent to a prison camp for humiliating the entire nation.

Juche is the official state ideology of North Korea, described by the government as Kim Il-sung’s “original, brilliant and revolutionary contribution to national and international thought”. It postulates that “man is the master of his destiny”, that the North Korean masses are to act as the “masters of the revolution and construction” and that by becoming self-reliant and strong a nation can achieve true socialism.